The Black Dyke has led me a merry dance and I have to admit that I'm a beaten man. The perch that Nick, the gamekeeper, had offered tantalising glimpses of, just one year previously, remain figments of a longing imagination. I am absolutely certain that they did exist, yet can't bring myself to believe that they haven't succumbed to some disaster, natural or otherwise. Whilst I readily admit that perch are not a species with which I have much experience, my angling hasn't become so poor that I would expect to continually blank when using a lob worm where these ferocious predators exist in viable numbers? I've waved the white flag and am seeking adventure in pastures new.
At silly o'clock, on Thursday morning, I headed over to Marshside for my first bash at a new venue. I blanked, so consistency isn't proving to be a problem, wherever I go! It was a half-hearted session, setting up blind, in the dark, and having just three hours available. I got what I deserved, in that respect. One thing that I will mention, again, is the huge numbers of Cormorants leaving the Stour Valley at first light. I estimated 1,350 N in the first two waves which came directly overhead, there were many others moving in the same direction further east, towards Sarre and St. Nicholas at Wade. The first birds had passed at 07.16 hrs and it was all over, bar the stragglers, by 07.27 hrs. Bloody impressive stuff. The first returning bird (single) was at 08.20 hrs. Between then and 09.30 hrs, when I packed up, 574 Cormorants had flown back towards Stodmarsh/Grove.

Back out there this afternoon, for an into darkness session, the first thing I saw on arrival at my chosen swim was a flock of 40+ Pink-footed Geese dropping down onto some arable ground, just west of the fishery. This is the biggest flock of "pinks" I've ever seen in Kent; so a good start! With more time to play with, I was able to get myself prepared and fishing without any issues. Two split cane Mk IV's, one with an ABU Cardinal 44X, the other an ABU Cardinal 55. Proper retro kit and an absolute joy to use. Mick, the bailiff, turned up for a chat, which is always nice, and we both agreed that the dank conditions bode well for my chances. I told him of my plans to fish into darkness, just so there was no chance of me, inadvertently, breaking club rules - he assured me that it was OK and bade me tight lines as he left. 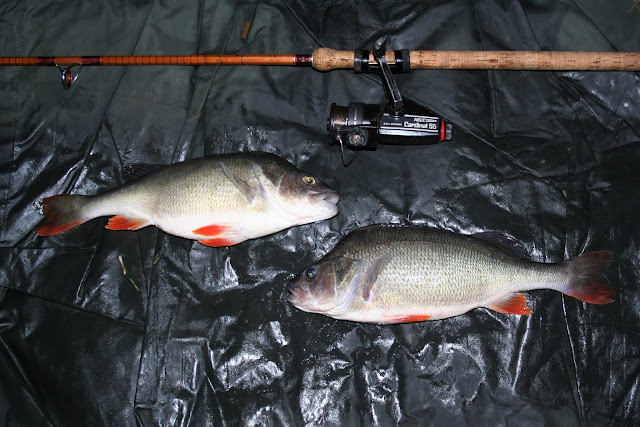 What a result! I'm still not too sure that my tactics are as fine tuned as they could be but, one thing's for sure, they're getting better. I had numerous tugs and touches, as indicated by the Siren R3's, which resulted in two perch being hooked and landed. Like peas in a pod, at 2 lbs 5 oz & 2 lbs 4 oz, they represent my best brace, although my self-take efforts fail to do true justice to the occasion.
Work will prevent me getting back out until next weekend, so I have plenty of time to mull over some ideas that I'm hoping will provide that edge which will see continued improvement with this current project.