On a whim, I had a session on the club stretch of The River Wantsum, first thing this morning. I left home before 05.30 hrs and was getting the kit out of the van within twenty minutes. If I'd have known how much surface "duck weed" was present, I definitely wouldn't have bothered but, I've been doing quite a bite of writing, of late, and one particular thread had taken me down the path of where I'd managed to catch pike since 2011. It's been quite enjoyable going back through my records, helping me realise just how productive the Kent fisheries, that I've visited, have been. The one, glaring, omission gleaned from this data correlation exercise is the realisation that I've never caught a pike whilst fishing within the Thanet boundaries. No great shakes; Thanet is hardly pike central, there being just a couple of still waters (syndicated or club controlled) plus the obvious boundary rivers, The Stour and The Wantsum, where this species exists.  I've actually caught pike from The Stour, but was fishing from the wrong bank! I was on the Kent mainland looking across the river to the halo'ed soil of Thanet. 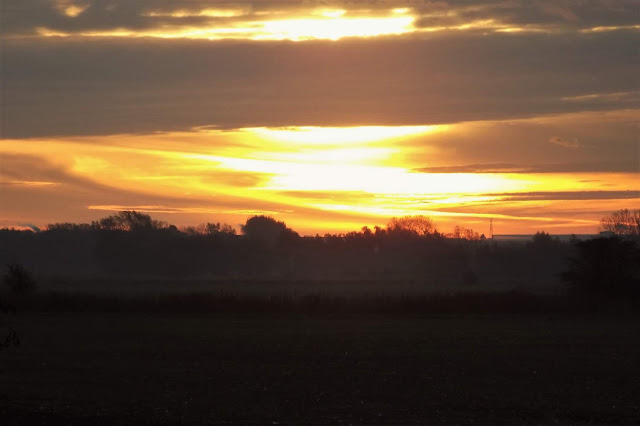 So, this morning, I was deliberately attempting to rectify this "glitch" in my records and, wouldn't you know, I only bloody did it. A small jack, around four pounds, took a fancy to my popped-up Mackerel tail section and rectified a small blemish in my angling story. All this background drivel - hardly worthy of a post? You're absolutely bang on - it's mundane at very best! So what's this all about Dyl?


I'm fishing The River Wantsum, right in the centre of one of Kent's best worked "Local Patches" - records going back to 1963 and it has an "Official List"! Because I'm not party to this record gathering, I guess what I saw, this morning is un-official? Didn't stop me seeing it, just like it didn't prevent me catching a pike. I've already mentioned that I was on the bank before 06.00 hrs, sun-rise was at 06.57 (ish) and the Stour Valley Cormorant roost had already started to flight over the marshes. The first two waves numbered in excess of 1,550 birds, followed by the stragglers which would have easily added another 1,300 to the total. The crazy bit is that before the birds had finished passing overhead to the north, there were already others moving in the opposite direction, plus good numbers flighting out eastwards, over the Chislet Marshes. Absolutely no idea how many birds were involved, can't say that I'm all that bothered, just there were bloody loads of Cormorants around today. I also added "ring-tailed" Hen Harrier, two Merlin - one stunning adult male, two Marsh Harrier and several hundred Chaffinches (although I failed to pick out a Brambling), 14 Skylarks and a couple of Goldcrests, all written down in the "Perch Diary". I accept that what I am doing is "listing" but under no circumstances is it "Official" and, by definition, nor is any other - they're simply lists maintained by whoever, for whatever reason. If you can miss 3,000 cormorants, how accurate are the other stats that you choose to maintain?
Posted by Dylan Wrathall at 23:53