The season is almost a month old and still I await my first bite! This is not me moaning but, instead,  just stating facts about my results, thus far. I am fishing in a very remote spot, way out on the Levels, completely new to me, where I have located a small group of carp, one of which is bloody huge! My baiting strategy remains very particle biased, with pigeon tonic seed mix providing the base. Hemp is always an essential in any "party mix" that I use and it's seen me in good stead over these past few years. Originally concocted for use during the R.Stour barbel campaign in order to reduce the bloody eel problem, it has proven to be a first class fish attractor, with one or two tweaks along the way. Liquidized sweetcorn is always a decent addition, to any mix, as are Tuna flakes (in brine) if eels are not a consideration. In all honesty, there is very little difference between my "party mix" and the majority of other carp anglers "spod mixes" except I don't use boilies in mine!

My real issue is with hook baits. I know my attractor is well proven and I have seen carp feeding over the spots where I've introduced it, what I am failing to do is get these fish to pick up my baited hook. If the bungalow wasn't in such disarray, I'd be able to prepare some fresh Maples, Chick Peas or Black-eyed Suzies, as I felt necessary, thus being able to ring the changes. Alas, it is not possible and I must struggle on with the bait I have at my disposal.

That original section of this post was written on the 13th July, after a run of four consecutive blanks at my original spot, The chance to get out whilst the England v's Belgium nonsense was underway allowed me opportunity for a bit of fish spotting. What a result, I managed to relocate that big fish, about 500m downstream from the original swim, and had the camera to hand which allowed me to grab a few images of my target carp. I returned home, a niggling desire to get straight back out, plaguing my thoughts as I drove home. I knew where it was, so I really needed to cast a bait in it's direction. Bev wasn't overly happy, but I went back and got two rods out in the general vicinity, hopeful of a change of fortune. Nick and Tom were also afoot on the marsh and stopped off for a chat as they headed homewards, as the late evening light started to fade away. They couldn't have been gone more than ten minutes when my right hand rod was away and I found myself playing a lively little wild common of around five/six pounds. So my first carp since 16th June and a sure sign that I'm doing something right. Confidence boosted, I was back out this afternoon, whilst Bev watched the Men's Final at Wimbledon and France were beating Croatia in Russia. Nothing to report, although Tom rang me with a sorry tale of a missed chance. Later we were to spend a while watching some carp moving around the drain and made plans for further experiments as our season progresses. Sadly, Nick - the gamekeeper, is moving to Sussex in order to further his career, so it will be just the two of us for the remainder of the summer/autumn. 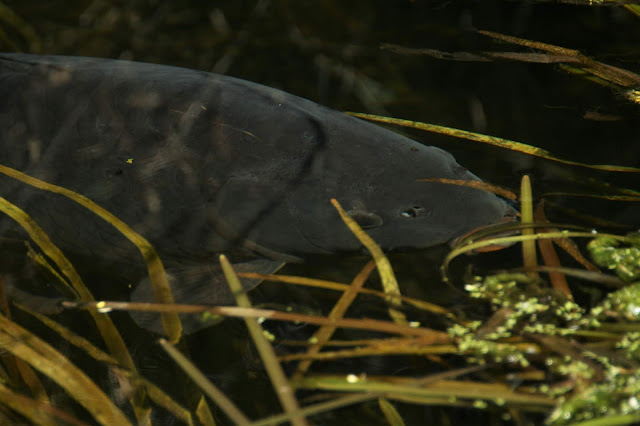 Tom and I have very similar aspirations, although we are chalk and cheese in our approaches. He is very much a modern carp angler, aged 27, I'm at the opposite end of the spectrum as regular readers will be well aware. Tom is firmly convinced that the boily approach will yield him the result, whilst I have to stick with my tried and trusted particle tactics. What is not up for discussion is our unfailing belief that every fish in these waters are very special carp, each one to be cherished as if it were your very first.

Not everything is about the fishing, these East Kent flatlands are home to some wonderful wildlife and it can be no surprise that I require bite alarms to ensure I'm not distracted by some other encounter when I finally get that bite registration. Beavers are now well established right across the "Levels" with anglers able to recall sightings along The Stour, Wantsum, Westbere, Stodmarsh, Ash and Worth Marshes. I saw three on Thursday evening in a tiny little side drain. We might not have any Otters (yet) but plenty of these unwanted inhabitants around the area  - there are farmers applying for licenses to shoot these creatures due to the damage to waterside trees (willows). Lord Northbourne has needed to have a willow, made safe, after the attentions of our furry friends, at one of his flight ponds out on Worth Marshes. I can't recall any consultation process which asked the inhabitants of East Kent as to our opinions on the introduction of these sizable beasts into the local ecosystem. It is no longer of any consequence, Beavers are here to stay and we have to live with this situation.