It had never been my intention to visit Mallorca and go at it, full on, in order to amass a lengthy list of the island's specialities; there were other priorities as I've already mentioned in the previous post. It didn't mean that I was without opportunity to wander around, especially early morning before the clan mustered around the pool and made plans for the day ahead. The adjacent farmland held many of the species which I had expected to find in such terrain, although I'd not expected to see so many Cattle Egrets in fields which held no livestock. Hoopoes are alway good value, no matter where you encounter them, and so it was great to discover a family party within a few hundred metres of the villa. They remained faithful to one particular paddock for the entire duration of our stay. Serins "jangled" in the hedgerows and gardens, Sardinian Warblers rattled their machine-gun alarms from dense scrub as I passed whilst Fan-tailed Warblers "zitted" their way overhead, occasionally dropping down to perch in, Fennel-like, umbellifers, posing for the long lens. 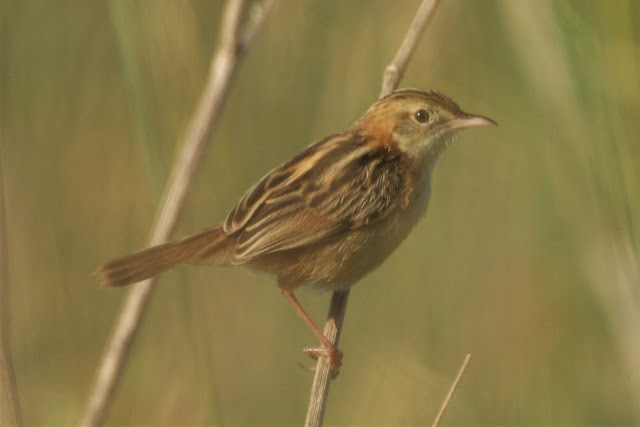 The mini-bus allowed me to visit the two reserves at Albufereta and S'Albufera where the long lens was in overdrive, such is the richness of birdlife to be seen around these magnificent wetlands. Purple Swamp-hen was seen at both sites, I'd only seen the species on Menorca previously. I fluked Marbled Duck, Glossy Ibis, Squacco Heron and Gull-billed Tern at S'Albufera and got great views of Bee-eater, Woodchat and many hundreds of Black-winged Stilts. Eleonora's Falcon was a gimme, but I had to wait until our final day to connect with Booted Eagle, I saw eight from the garden! It is a joy to spend time in relatively unspoiled habitat, watching species which are like gold-dust in the UK. Two hours from Gatwick and waiting for anyone who wishes to explore the potential of the novel concept of looking for birds without the aid of a pager! Who knows, it might just catch on?

I had a brilliant, if somewhat limited, time wandering around this spectacular place. If I'd have made more effort the likes of Thekla and Short-toed Lark, Blue Rock Thrush, Marmora's Warbler and many other species would have been possible. Hey-ho, but I suppose that's much easier to say when you've already seen them on previous visits?
Posted by Dylan Wrathall at 21:26