Early finish on a Friday and, with Bev taking her parents out shopping, it was an easy decision to grab the gear and revisit the club lake for another spot of floater fishing. What I hadn't foreseen was the presence of twenty-plus other members also taking advantage of the conditions so I started in a very tight swim, on the wrong end of the wind. Not that it makes too much difference on this venue - there are teeming hoards of these small carp. I managed to get a few interested and landed an F1 for my troubles. However, by 17.30 hrs, the majority of members had packed up leaving me with the freedom to have another look around and choose another swim (or swims?)
I was rather amused to note that, almost to a man, the anglers were geared up for carp fishing - their general approach based upon legered luncheon meat or sweetcorn. "We don't want those bivvy boys" comment from a committee member ringing in my ears - carp, and carp angling, are the very basis for UK freshwater fishing, as an industry, in 2017. The club either moves with the times, or goes under? Funnily enough, I hadn't joined for the carp fishing, it was the perch that were responsible for my initial interest and provided the focus for my early efforts. Still, as things have panned out, I'm not too sad about the fact that I have a carp puddle as a club water. 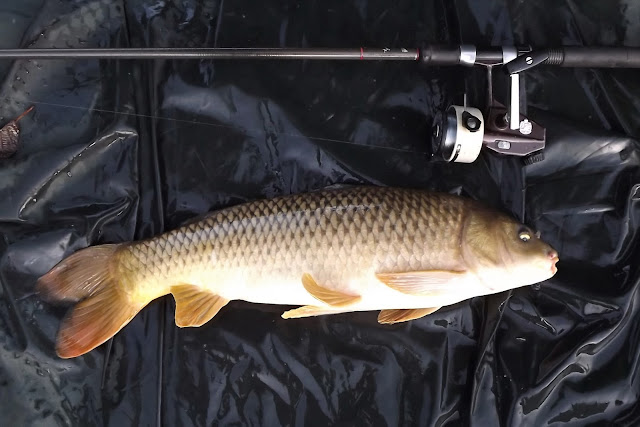 Quite what my fellow members are thinking (?) of when casting a bottom bait out into the pond, when the fish are clearly showing in the upper layers, is beyond my comprehension. You make your bed - you lay in it! I'd changed my reel over to an ABU 66X, purely because I am able to cast further with a fixed spool, but stuck with the Tring Tench rod and free lined bread. But I did have a tweak which provided a spectacular edge! I used wholemeal instead of the regulation Kingsmill white. There are a few issues with the presentation, the bread is not very robust, but the fish love it and I took a succession of carp as the light started to fall away, plus a bonus ide (which I weighed at 2 lbs) that provided a nice comparison to the fish of Wednesday.

I finished up with fifteen (ish) carp and that bonus ide, so a very good session. However, the highlight had to be my encounter with a Willow Emerald damselfly - this is possibly the first site record? I had seen Steve Gale's recent post and felt it poetic justice when I focused the camera on this wonderful creature. There's an awful lot more to fishing than catching fish!