I've not been feeling that sparkling, just lately -  a problem with my left calf/Achilles which has taken far longer to clear up than in my youth. Don't I just love getting old? The direct consequence of this problem has been that I am unable to undertake the trek to my regular marshland drains and have had to cast a line in less distant venues.

A trip down to the tidal reaches of The Stour was a complete blank, yet enjoyable none the less. Marsh Harrier, Hobby and two Common Buzzards provided the spectacle although it was the number of Yellowhammers which was the greatest surprise - easily 20+; with several family parties present.


Benno and I joined our local club because we'd heard rumours about the Perch they contained. However, the fact that these venues also contain decent populations of carp, tench, bream and ide has allowed us to provide my grandson, Bryn, with some fantastic learning opportunities. So, as I'm struggling to walk far (catch fish - period!) I thought it might be prudent to have a bash after the scamps which inhabit a small "Reedy Pond" Tackle choice was simple - split canes and centre-pins; the bait was also straight forward. Particles from the Pigeon Tonic mix as the club rules forbid the use of boilies, nuts and pellets over 12 mm. A comment from one of the committee stating "We don't want them bivvy boys!" - strange attitude, although the club is very match biased. Still, you don't have to join, so must accept the terms and conditions when you pay your fees? 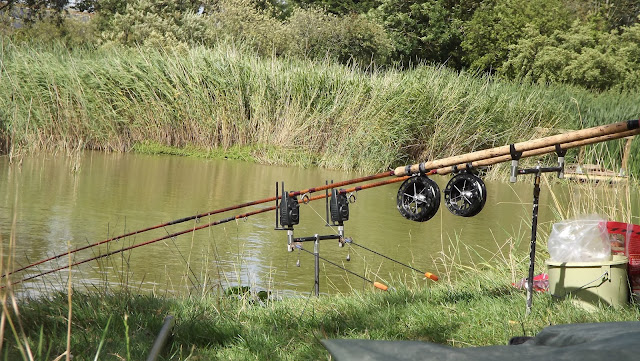 Fortunately, for me, these restrictions have no effect on the way I approach this venue and I am confident that I can bend a rod there with some regularity. The fish aren't big, I've only seen one that looked to be a double, but they are in fantastic condition and give a great account of themselves when hooked. I also have another ruse which assists my cause and allows supreme accuracy at intimate range. I call it a poor mans bait boat (something else which the club forbids) - I use a pole cup to place my bait and rig right into small gaps in the marginal reeds or under over hanging bushes. I was first made aware of this technique when I watched Cliff "Bunny" Bunyan successfully use it for barbel on The Stour. I have to say that it is very effective and I took a succession of scamps which fell to my double maize/IB pop-up or maize/maple/pink squid sweetcorn combos. Great fun and something which I will be able to show Bryn when we next get out.

As I was sat there, enjoying the sunshine and a cold 1664, a few Swifts drifted past, high overhead. Despite the date, a sure sign that Autumn is fast approaching and time for me to get my arse in gear and focus on the split cane thirty project. Out in the garden, early this morning, filling the feeders for the ever hungry hoards when I spotted a Humming-bird Hawk Moth feeding on a buddliea by the decking. A couple of  shots using the EOS/Sigma kit resulted in this rather pleasing image.