The weather forecast was dire, so much so that Benno & Luke cried off and stayed at home watching the football - strange that? One a Spurs fan the other Arsenal! Being made of sterner stuff, plus I'm on a roll, I got down to the fishery by 14.00 hrs - luck was on my side as Bev had plans to visit various retail outlets as she plans the interior of our bungalow following extensive modification - builders knocking walls down and similar stuff. Apparently I'm to be annexed into the loft, such is the scale of devastation Bev envisages - let's hope the money stretches that far!
So, once again, I find myself alone in my attempt after a split cane thirty. No worries, it's a fabulous place to be whatever else happens. I'd found some fish within ten minutes of arriving, they were in a swim some quarter of a mile west of where I'd taken the 23 last weekend. Gear collected from the car, I was fishing by 14.30 hrs, a screaming take, just fifty minutes later, which resulted in a lovely little common (14 lbs 14 oz) ending up in my landing net. A cracking fish, made all the more enjoyable when Paul, the bailiff, turned up. He was happy to take some photos and spend time chatting about the fishing and associated subjects - nice guy! 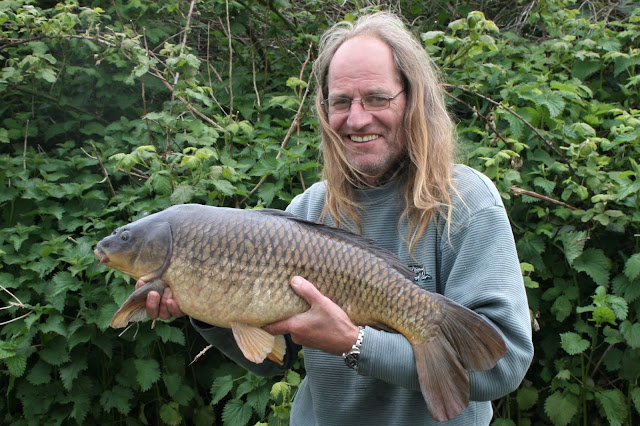 Rods back out, a few more freebies scattered over the area, I had to wait until 18. 10 hrs for the next action. Another screamer, this time a small tench had been tricked into taking the bait. Just out of interest I put it on the scales - 2 lbs 12 oz the result.

Same routine, rods recast and a scattering of freebies over both spots, it wasn't ten minutes later when the same rod was away again. I have no idea what happened, but I lost the fish when my main line was cut by an underwater snag - it came back looking like it had been dragged over a cheese grater!
At no time did I feel that I hooked something exceptional and, if past experiences are anything to go on, I saw no signs of disturbance on the surface. All of the carp I've taken (and that's now three!) have boiled on the surface as I've set the hooks under these particular circumstances.
No more action before 21.00 hrs when I packed up and headed for home. It was a great session, the dog walkers friendly as ever (such a pleasant change from some of the Thanet version) and I made one guy's day when I allowed him to photograph that carp on his i-phone. 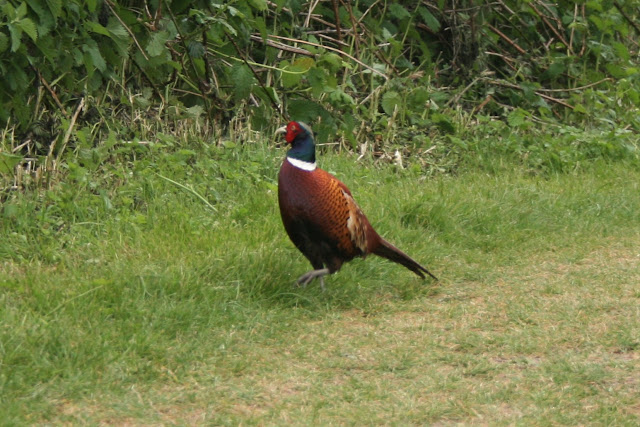 I've neglected birds in my recent blogging; although they are still a part of my daily routine. A cock Pheasant came strolling past my swim, beyond me before I could grab the camera. I only had the 18 - 55 mm lens fitted, but managed to grab a shot as the bird attempted to retrace it's route as a couple, walking their dog, approached from the opposite direction. Greenshank and Tree Pipit over the garden in recent days has been a nice distraction, but I have to admit that I am really struggling to find any enthusiasm of late!
Posted by Dylan Wrathall at 23:18