All three of us met up at the fishery, just before 16. 30 hrs (Saturday 01.04.17), and took a stroll along the chosen section in an attempt to locate a carp. or two. before committing to swim choice. We saw nothing which could be directly attributable to carp activity, thus had to rely on watercraft and "gut feel" for our first session of 2017. Fortunately we do have last years results to draw upon, so educated guesses were used rather than blind faith. 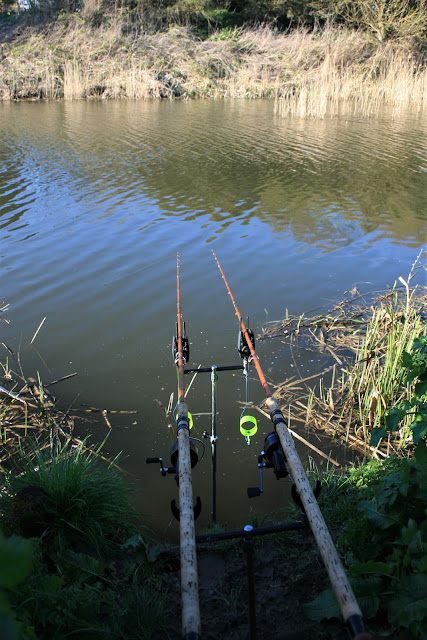 Sun-set wasn't until 19.28 hrs and we had plenty of time to watch the water and were eventually rewarded with two definite sightings of carp; so all very encouraging. It confirmed that they were present in our section and, as a result, boosted confidence. It wasn't until May, in 2016, that Benno managed our first carp from this venue, so it came as no surprise that all three of us blanked today. We're not getting involved in "time bandit" tactics - if we don't get any indication within three hours then it's time to head off home. We are on the banks five weeks earlier than last year; will we be able to make this work to our advantage?

As I have stated in my previous blog, we're fishing beside a public footpath which is very popular with the local dog walking community, plus regular joggers, cyclists and ramblers enjoying the exercise and facilities that the venue has to offer. It was an "off the cuff" remark by a lady walking her dog, which is the catalyst to this post. I was sat on my unhooking mat, what little gear I had, neatly stacked on the top of the bank, a can of "light ale" being supped as she approached. "That fishing lark looks like really hard work!" being her quip as she passed. I offered some, light-hearted, reposte. It wasn't until she had disappeared from view that I actually thought about what had been said and the perception v's the reality.

I have absolutely no doubts as to the image I portray, perched beside my kit - can in hand! Hard work? Well that's already been done, it's how and why I'm there! Bait preparation, rig tying and testing, assembling the various items required for the project - all of these things have taken place long before I leave home. My time at the fishery is about enjoyment, hence the laid-back perception of an outsider. Nothing could be further from the truth, although I am rather pleased with this situation. If that is how I appear to a non-angler, perhaps some of those "brand label fashionistas" will also see a similar thing and dismiss such "Noddy" tactics as unworthy of their attention - I can but hope!