There was a time, at the start of the millennium, when birding was my total focus. When Bev and I first met, I was still a rabid county twitcher, off after each and every Kent tick that I became aware of. It was a period of great fun and camaraderie, with many other guys chasing that milestone figure of 300 species within the county boundaries (well not exactly - because birds seen from Kent, flying up/down The Channel or The Thames/Medway Estuaries were also legitimate, although technically not within the county, which ceases at the mean high water mark!) So that was my gig, at that time, but the law of diminishing returns, I clocked up 348 with relative ease, and the lack of fulfilment; I was learning very little about the birds I was seeing. I packed it in and focussed my efforts on finding my own stuff and developing my skills as a birder. In no way is this a unique situation, I would think that for, the vast majority of, "ex-twitchers" this will be a journey to which they can readily relate? Living on Thanet meant that one group of birds, in particular, were to become central to my desire to push the limits of my own knowledge and experience (sound familiar?). Gulls!; yet they are a despised group in the opinions of the vast majority of Thanet residents. Our local Herring Gulls have become notorious for their bin ransacking and territorial aggression during the breeding season - many a time has a BBQ been abandoned due to the intimidation of a pair of roof nesting gulls. They do not tend to endear themselves with this type of behaviour. 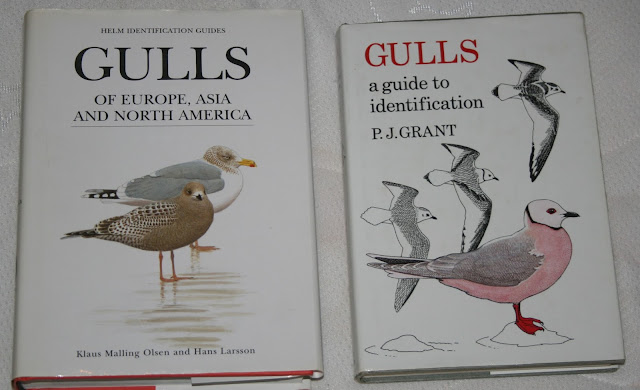 Ramsgate Harbour and North Foreland were to provide the majority of my early opportunities, as I strove to learn about the nuances of age group plumages and taxonomic splits. These initial attempts were cringe-worthy as I fumbled through the mind-boggling assault course of immature gull id. Armed, as were all others, with Peter Grant's master-class, quickly added to by the purchase of The Helm Guide by Olsen & Larsson, I sallied forth. One of the undeniable facts about looking at gulls is the more you see the less, you quickly realise, you know! They are a fantastic conundrum which has developed into a cult-like subject for many of the modern devotees - good luck with taking it to the next level.


My own time around the Thanet coastline was a period of huge learning and enjoyment as I chipped away at the edges of this complex puzzle. It was due to these efforts that I became fascinated by the spin-off learning to be had from reading C-R's (colour rings). Our Great Black-backs came from Norway, Black-headeds from Sweden and Finland, Lesser Black-backs from Suffolk, Herring Gulls from Belgium, East Sussex and a land-fill site(s) in Essex - fantastic stuff that was all new to me.
Cameras played as important a role as telescopes and binoculars - they could provide study material for use back indoors and were far more reliable than any attempt at field sketches/notes that I had the ability to make.

I didn't discover much, that wasn't already well established knowledge with Kent Ornithological circles. What I did, however, was I found it for myself. The pinnacle of my gull watching came with the discovery of an "L. a. ommissus" (adult winter) loafing on the pontoons within the outer harbour. My images being the first ever secured in Kent? The race has since become known as the Marsh Gull - I'm unsure of the present taxonomic status, but it may well prove to be an armchair tick sometime in the future?

I continue to get great enjoyment by scanning through the local gulls, especially those following the plough around Newland's Farm. I also derive much pleasure from my holiday encounters, those opportunities to study an unfamiliar race or species, in their home habitat - always something to be gleaned from the most insignificant encounter.


I had been going to write about my library, but Steve beat me to it, so this will have to do I'm afraid.