I'm probably boring the pants off of most visitors, to this blog, but the defining role Wilstone Reservoir played, in re-writing tench angling history, is responsible for many pivotal moments in my personal journey. My desire to go fishing for big tench again is what's driving my thoughts, dominating my waking hours, as I look towards June 16th 2015. What's rather strange in all this process is I'm not looking for a PB - I just want to catch some more decent tench (as defined by my own experiences) - a seven would do very nicely!

I suppose that my own history has set the "bench marks" - that Len Head chapter, in The Big Fish Scene, catalyst to me taking up my own challenge, of leaving the comfort of Pixies Mere and tackling, what seemed to me at the time, the massive expanse of Wilstone Reservoir. It now seems so crazy - whenever I go back it really is quite a modest sized fishery. However, as daunted as I was, the other members of the Tring Syndicate were incredibly generous with their time and advice. My learning curve was steep and, ultimately, very rewarding. The wealth of experience and expertise, upon which I was able to draw, was the best available at the time - true angling giants descended upon this venue as the news of the quality of the tench fishing spread. These fish were by no means easy, not all visiting anglers achieved their ambitions, but many did. There were two main approaches to these fish. Firstly, and the one that vast majority favoured, was the set up a bivvy and sit and wait - bait being introduced in massive quantities in an attempt to induce a feeding response. The second, and far more rewarding, method was to be mobile and fish for tench which were showing - ie usually rolling at dawn, but also sending up patches of frothy/fizzing bubbles as they fed. Tony Ward, Ken Brown, Simon and myself were all relatively local anglers and could easily fit in a four hour session before work, should we so desire. It was this type of fishing that really set me on my way. My results were outstanding - I was so confident that I would catch if I could find them. This really caused a problem with a guy from Wales! He'd driven 300+ miles to Wilstone and set up his gear at the top of the car park steps! Tench were moving to his left and right, but he couldn't be bothered, after that drive, to move his gear, just 200 m, to where the fish were showing. And it was me who was "jammy"?

In the summers of 1991 & 92 I'd been so successful that I'd been asked to do a piece for The Anglers Mail, although Roy Westward, the then editor, had originally wanted me to write about cat-fishing on the Leighton Buzzard AC venues. Don't be fooled into thinking that I was anything more, as an angler, than very ordinary - I just happened to be part of the craziest gang of "Specimen Hunters" on the circuit during this period. The Savay "Looney Rota" were just playing at it - none of them would have lasted a day with us. Together we went to all the shows and conferences and played up at every one of them - we were impossible to ignore!
As I had spent some time working for Kodak Ltd, our group photo boards were, for that time, incredibly impressive because I had a fair idea how to use a 35 mm camera to get the best trophy shots - I got paid a considerable sum to write an advertising feature for Kodak which appeared in the Specialist Angler - the members magazine of The National Association of Specialist Anglers. So, I think it true to say that whilst we weren't the most talented of crews, our antics and publicity were top drawer. It is for this reason, and this reason only, that I ever got invited to do anything. Whenever I went to do a talk, the group who booked me knew what to expect - a pissed up hippy and a slide show of quality images with some raucous tales to go with them. Quite often Cuddles and/or the two Mitch's would tag along - always a recipe for a memorable evenings entertainment for all involved. 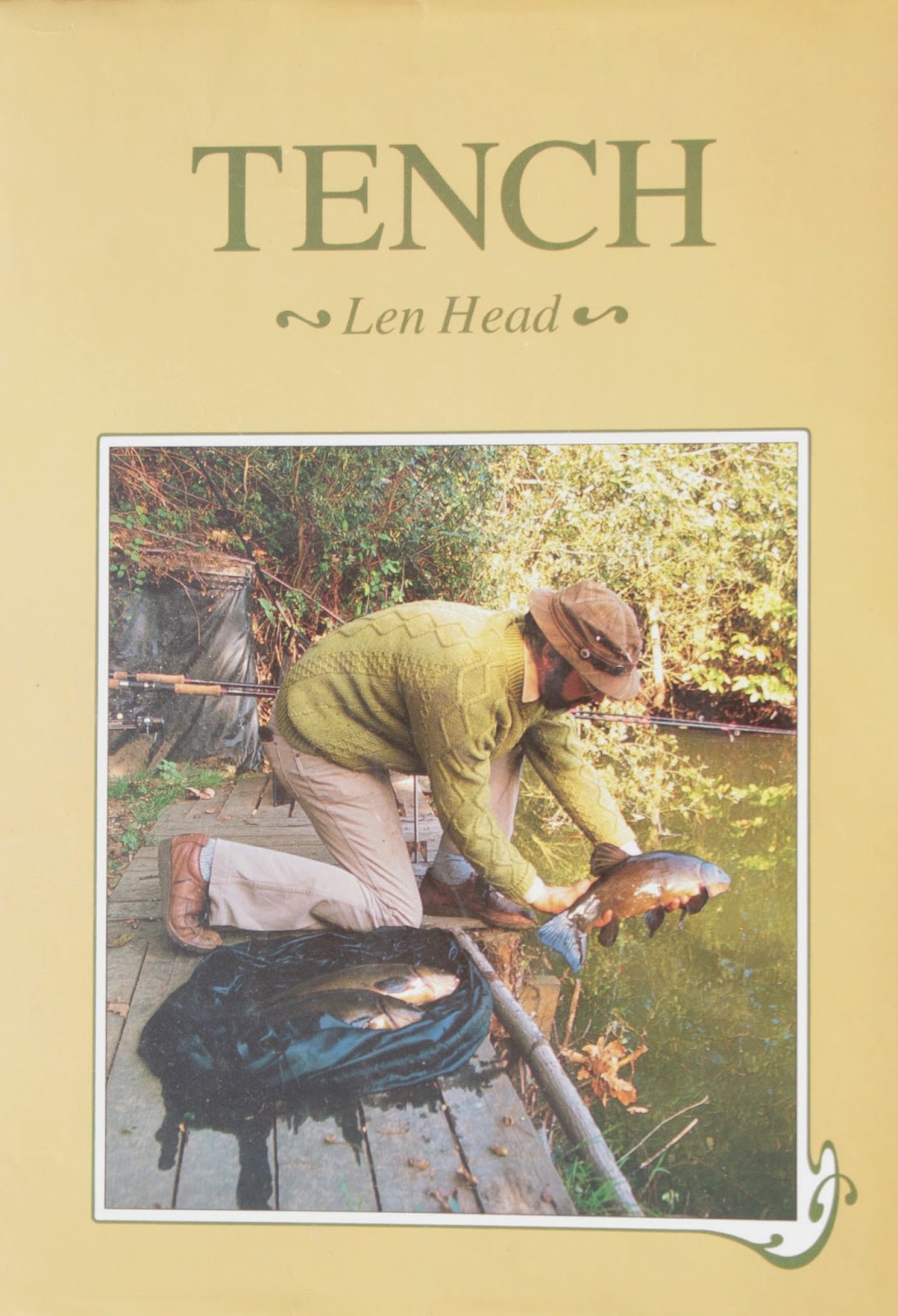 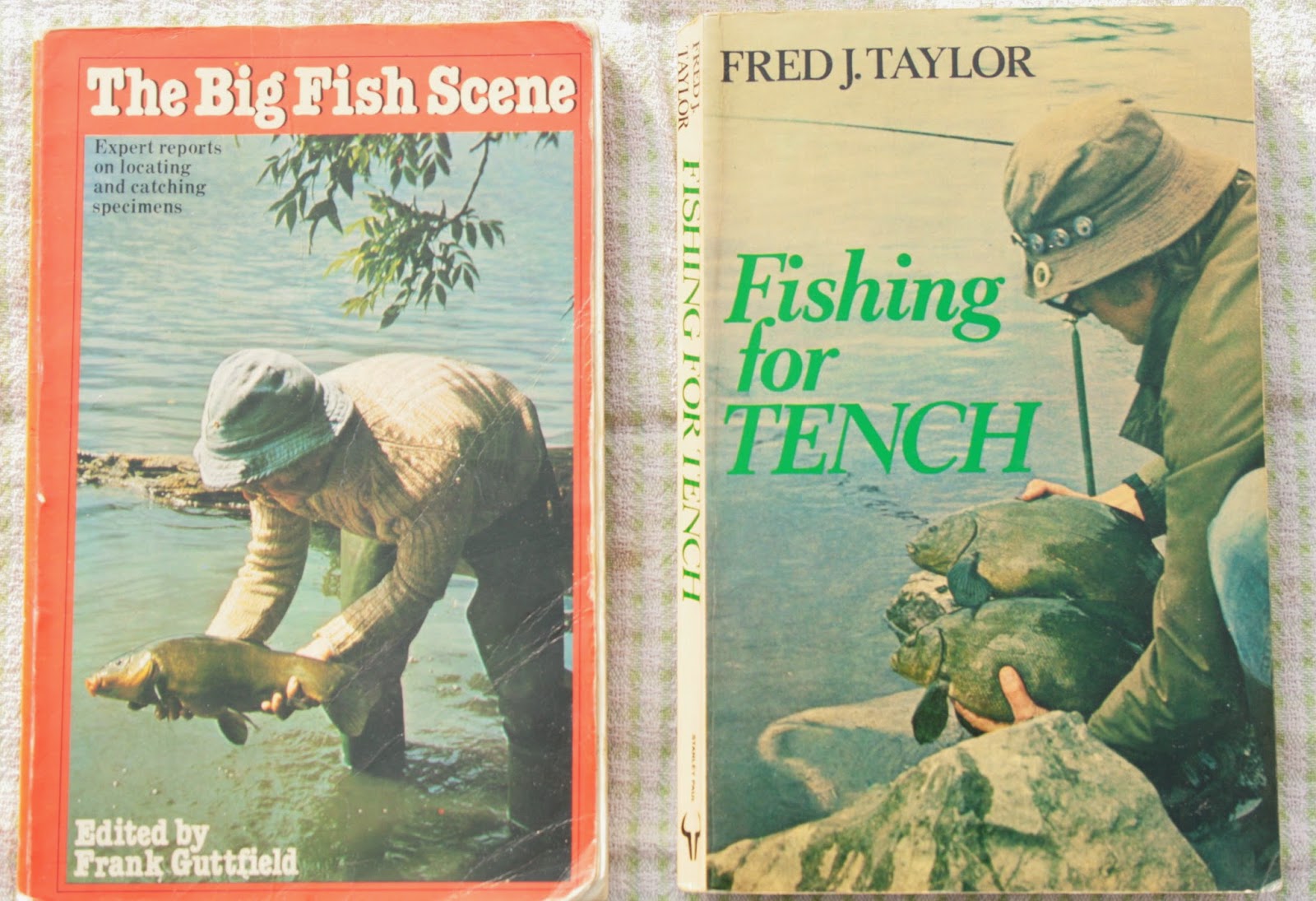 Now; this nostalgia fest isn't why I hanker after another chance to go tench fishing - although it has a massive influence on my thoughts. I have to admit that my reading material is of a similar vintage to the tackle which I am going to use, but what I'm seeking is an image - that tiny red eye on an olive-flanked work of art. Tench - there has never been an ugly one? My desire to recreate a scene from those wondrous Wilstone days - me and a 7 lbs+ tench, in digital. If it comes to pass - then I'll know that Mum's smiling.

Within the pages of my library are many links with my past, be they words or pictures? If I offend, or break any copyright laws, it is not my intent - I simply wish to accompany my words with a few images.

The greatest tench angler I ever met was Alan Wilson - medically retired at the age of 47 - he single-handedly re-wrote the specimen hunters calendar. He was a good technical angler, but not a great thinker, he used time in a manner that no-one previously had been able. In this respect, Alan was so far ahead of the game - what didn't he catch? I've witnessed, and photographed, a 3 lbs 14 oz Roach and a 13 lbs 12 oz Bream from Startops, he had Tench to 14 lbs 8 oz from Wilstone and a 27 lbs Pike from Stamford Res. Northamptonshire. He held the UK Tench record with a Wilstone fish of 12 lbs 8 oz (which he subsequently bettered) but he simply loved the challenge of Wilstone. Along with his fishing companion, Bob Henderson,
he systematically set about catching the largest fish in the water - it would be difficult for me not to admire Alan, and all that he stood for (popular myth has it that he died in his bivvy?) but, somehow, I wonder what other hobby could offer such accolade to a homeless tramp?
In no way do I wish to detract from anything that Alan achieved - he was always a gentleman, a font of knowledge and the maker of the best cuppa anywhere around Tring. Could I recommend him, as a role model, to Benno or my grand-children?  Not a chance - obsession is never healthy, as I've discovered to my cost! Doesn't stop it being fun?