Rod Hutchinson wrote, in The Carp strikes back, "Don't forget to taste the hops along the way!" (or was it smell the flowers?) Although I never got the opportunity to fish with this legendary carp angler, I did spend quite a few sessions, at various angling conferences, tasting the hops with him, Roger Smith, Bob Jones and Richie McDonald, amongst others. Happy, crazy days and nights. David Hall, yep the very same bloke who was proprietor of David Hall's Coarse Fishing Magazine, was also regularly part of this nonsense. I'm sure he was only there in order to keep "Snide Rumours & Dirty Lies" filled with angling gossip, the bigger the personality, the better the story. Copious amounts of "lunatic soup"; tittle tattle became less guarded and so the boasting began. Doesn't matter what you've done, we've done it better! David was never one to let truth get in the way of a good story; that column was a "must read" as soon as the new monthly edition appeared on the news agents shelves. I look back, with rose-tinted glasses, very happy that I featured regularly, along with the rest of the crazy gang from Hemel Hempstead. No publicity is bad publicity, and so it proved - I got invited to give illustrated (lectures!?) talks - slide shows - by various clubs and societies around the UK. Whether it was Newcastle, Devon or Thanet, I did the rounds, I even got invited onto the stage, for a NASA conference, at Loughborough, to speak about Catfishing the Leighton Buzzard AC waters. (Not my finest hour - but at least I performed and it's now part of the journey!) 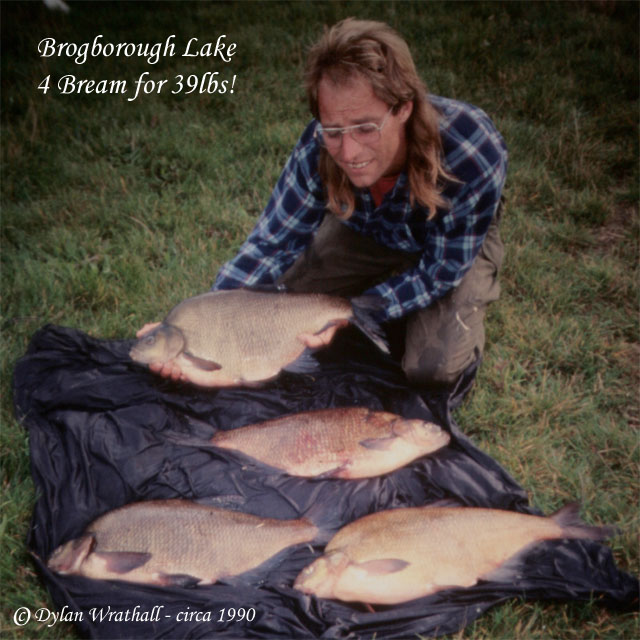 I think it's important to understand that this was a period before "Speccy Hunting" got hijacked by Carp fishing, and, therefore, it was still OK to deliberately target a double figure Bream, without feeling inferior as an angler because of such choices. Fashion statements, via brand logos, meant "jack shit", so very unlike today's big fish circus. Many items of tackle needed to be homemade, as the commercial manufacturers were focussed on catering for the needs of the pleasure and match anglers. We had spods, hangers, swingers and rod pods (dam stands), long before the carp lads "invented" them and I'm fairly confident that we'd tweaked these concepts from items that Dick Walker and those other pioneering anglers had developed as Specimen Hunting slowly evolved/emerged from the general angling scene of the post war years. Every generation seeks to reinvent the wheel when, in reality, all they can achieve is to fine tune the design?
Original thinking is, by definition, a very scarce commodity. I am now seeking answers to the conundrum posed by the carp of the East Kent marshes. I've been royally mugged off by these fish, so much so that I'm starting to doubt if I'll ever get another bite? I've massively underestimated the challenge, stupidly assuming that these carp would be naive, due to not being fished for. WRONG! VERY WRONG!! Yes, I've located some carp, one of which is huge, they're readily accepting my bait but can't trick them into taking a baited hook. Just how cute these carp are has been demonstrated during my last three evening sessions. Not a murmur from the Siren's, carp all over my spots, the freebies all gone, the rig/bait combos totally ineffective. Quite how this is possible has pushed my boundaries way beyond any comfort zone - I'm way out of my depth, experience wise. The two carp that I've recently managed to tempt have been nailed, so rig mechanics is not the issue. My problems are far more basic. What presentation do I need to use that might tempt more of these fish into picking up my hookbait amongst the bed of freebies?

With all this turmoil going on, in my head, I drove down to Camo's for a chat, and a coffee! Alan "Camo" Turner has a wealth of knowledge about all things carpy and, I'm happy to say, will always try to offer sensible advice to those who seek it. We spent a good half an hour talking through the options he felt might assist my cause. I came away with a few new ideas and £9 lighter, as I purchased some rather radical hooks. I will disclose more once I've had chance to experiment with these new toys. They are an incredibly aggressive design, verging on insane. Will they provide, at least part of, the answer to my current demonstration of angling inability? If I'm totally honest, I'd be gutted if hook choice was the root cause of my failure - surely I've been angling far too long for this to be realistic, yet need to explore every avenue open to me? Camo suggested naturals, I voiced an opinion based around "matching the hatch". I'm attempting to catch a fish, not set foot on Mars! Surely I possess adequate brain function to outwit a carp, even in 2018?

Two and a half months into this campaign and I've taken just three fish, one double! Hardly a definition of success, or even a project that's on the right track. The weird bit is that I'm rather enjoying this test, so very unlike the barbel campaign of 2013/14. I'm being forced to stray from my particle approach due to circumstances, ie the building project, but also the knowledge that Tom is having moderate success using modern baits (boilies, pop-ups and dumbbells). I'm experimenting with my tactics, if not my tackle, which can only assist with my learning progression. Of course it's easier now we have access to infinite opinions, via the wonders of Youtube, but none of that can replace actually going out and trying stuff for yourself. Obviously there is another way; I could adopt the time bandit approach and revert to my selfish, and totally pointless, behaviour in an attempt to compensate for a lack of angling skill within the smoke screen of rod hours. Bev and I would part company very quickly if it were an option I was prepared to explore. No point getting old if you don't get crafty (artful) - too much good stuff going on in my world to ever consider a return to a pathway of lunacy and single-minded obsession, just to place a wet fish in my landing net. If/when I catch a fish then I would like to think that ability had far more to do with the capture than the simple equation of time spent on the bank, times three, because that's how many rods are allowed! My use of the rod hours statistics as a measure of how talented an angler really is due to Jim Gibbinson. He was a fabulous angler, a great writer and also a great thinker; he first raised the awareness of eutrophication to the ecosystems of our freshwater fisheries, way back in 1983. Jim always placed ability, above time, in all angling situations. He was the first speccy guy, that I ever heard, to praise match anglers, and their methods, in the respect that they had to perform within defined time barriers. If they fail to catch within the designated time they couldn't compete, thus angling ability was a key factor that couldn't be disguised by extended time on the fishery. (Still can't) Jim's wisdom still holds firm in my own approach to "big fish" chasing. I think that the real skill is "Know when you're beaten!" - there's always another day!