I got out for an over-nighter yesterday - the first outing of the Mk IV project. Sandwich Coarse Fishery is a small commercial set-up, but it has a nice vibe and I enjoy the fishing because it's not to be taken too seriously. It's the place I go when I need to recharge my enthusiasm or test out an idea for a rig or bait presentation. There are a few very nice fish in the main lake, but the general, run of the mill, carp are low to mid doubles.
I arrived around 15.30 hrs and had paid my fee and got my gear to the swim within an hour, ringing Benno to let him know I'd arrived. He turned up just before 17.00 hrs, having been working close by, and we had a chat about the rods and future plans. I had cast the first rod out and was preparing the second rig when the alarm sounded and the indicator smoothly rose towards the butt. Over went the rod and a satisfying curve developed as the fish was hooked. I had baited the rod with "Spicy Peperami" fished over my usual particle mix - something wasn't right, the fish was powerful, but it didn't feel like a carp; and so it proved. A bloody pike of 11 lbs 2 oz, hooked fairly in the jaw, but what an anemic looking fish - typical of dirty water conditions? Benno took some photos before bidding me "tight lines" and heading off home. 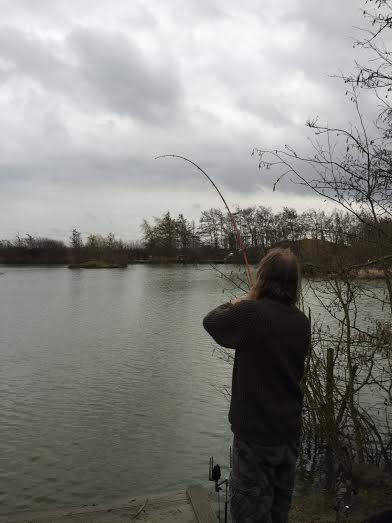 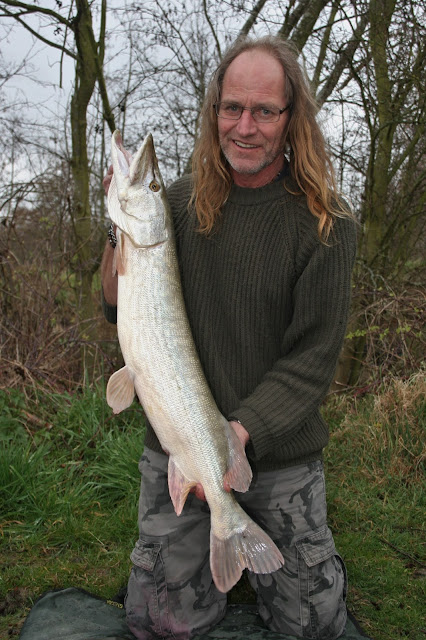 It was just after 21.00 hrs that I had a screaming take on the other rod, chick peas, and this time there was no mistaking the speed and power of the carp on the other end. A plump little Mirror, of 11 lbs 6 oz, graced my landing net - yet avoided the photo call due to a dodgy camera sensor, which was probably due to the damp; it was drizzling all evening before changing to heavier, and more persistent, rain much later. And that was my lot, I'm afraid - I missed a chance at around 02.00 hrs, it was off before I could get out of my sleeping bag!
It's a start and the rods are an absolute joy to use; that they are cradled on twin bars with modern alarms just adds to the piss take. I will have some fun when I roll up with this kit at a serious venue!
Posted by Dylan Wrathall at 10:45