It was just after 05.30 hrs that I made my way across to work. Several Golden Plover flushed from the newly planted potato field and there was a flurry of Redwings, passing overhead; the first for some while. I had a blinding day at work - deeply insulted when my boss asked me to sweep the outside perimeter, taking care to ensure the chiller units were cleared of leaf litter! Are you sure? The same dough as I get for grafting, just to push a broom around in the sunshine - oh! the utter humiliation. 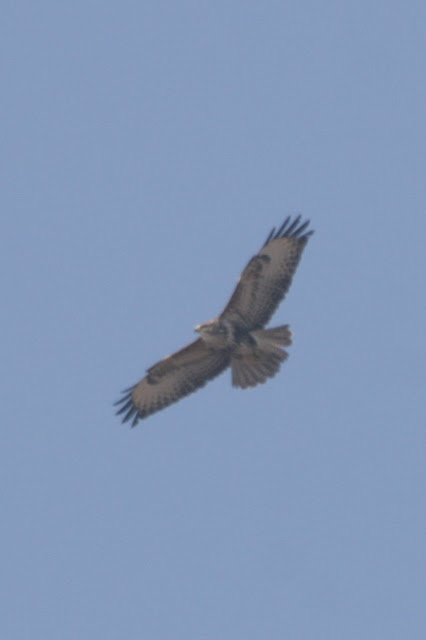 Despite my protests - off I went into the great outdoors, thinking of penning a letter to my member of parliament about this shoddy treatment. The skies were clear and the gulls busily going about their courtship routines - perfect for raptor indication. A couple of false alarms before, at 10.50 hrs two Common Buzzards were seen, as they spiralled north, causing some minor irritation to the flock. 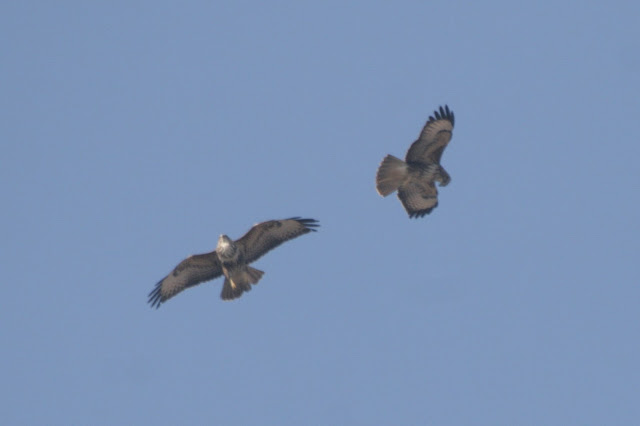 As I arrived back home, a little after 13.00 hrs, there was a massive reaction over Pyson's Road, but I failed to locate the cause from my back garden. Shouldn't have worried because less than ten minutes later the gulls were up, over the estate, as a group of six Common Buzzards drifted leisurely westward. The gulls remained agitated, although I failed to spot any more Buzzards. Just to put the cherry on the top - a Reed Bunting landed in the garden Elder, calling loudly, then flitted into one of the, heavily pruned, Buddleias beside my aviary - allowing a quick record shot before it moved on. Spring is very close!

I bumped into Franny, yesterday, and spoke about the local birding (and mothing) - very quiet at present. He enquired about my March eel? I have got one more session available, tomorrow night, before I have to "chuck in the towel" on the local drains. With another two weeks, of the month, remaining, it might be possible to salvage the project, should I fail tomorrow, by giving the RMC a bash? (No close season restrictions)

I have quite a few ideas, and things to say, about this particular angling challenge - the post has already been started and awaits my final thoughts, some more photos, and results, but will be appear on my blog no later than 1st April.