I have just got back home after a short, evening, session after eels. I was out, on The Levels, yesterday morning and had a pick-up on a whole Sardine which, on retrieval showed all the signs of eel activity - the guts were cleaned out. A small jack saved the blank and I scattered a few chopped bluey sections around the general area, prior to leaving, knowing that the predicted forecast is for a dramatic change in conditions - we might get snow by Wednesday! I had a two day window in which to complete my January eel challenge - Bev agreed that a Sunday session would be OK, so that's what I did.

I arrived at the drain, this afternoon, in plenty of time, it was around 14.30 hrs and already a Barn Owl was hunting over the adjacent marshes. Only two rods (Duncan Kay's with ABU 66X's) were cast out, with a few scattered bluey sections strewn around the swim. It was overcast and generally quite mild, but a bout of hailstones was a reminder, if one were needed, that this is January.
As dusk descended, I was on the phone with my brother Simon, my right hand rod was away and I found myself attached to the smallest pike ever taken on rod and line! Not quite how I'd planned it, but a blank had been avoided!

A new bait (bluey section) was cast back out into the increasing gloom and I sat back awaiting further action. Darkness fell and the drain was deathly still; there was an awesome thunderstorm moving northwards above The English Channel and I spent a while mesmerised by the stunning light show it produced. I was brought back to reality by a fast take on the right hand rod. Grabbing the landing net, I engaged the pick-up and "fish on!". A dour struggle resulted in an eel of 3 lbs 2 oz gracing the landing net and, as such, my January challenge has been realised. I am overjoyed by this result; something which I had thought about, long and hard, has come to fruition - I don't suppose there was another angler, in the whole UK, fishing deliberately for eels tonight? 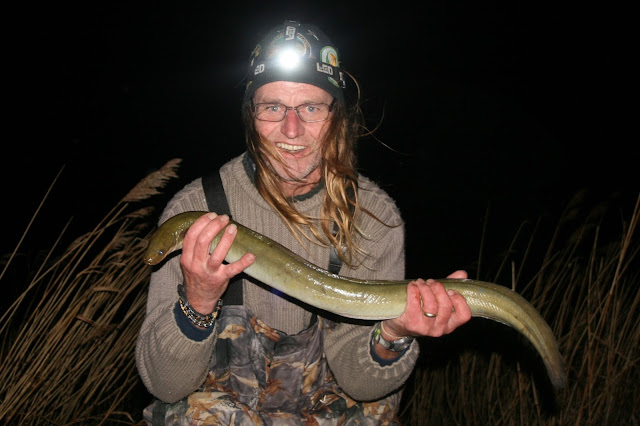 In spite of it's modest size, this fish is right up there with the best specimens I've ever been privileged to catch. Bev simply doesn't get it - she hates eels; they remind her of snakes and worms, yet I feel like I've just run the 4 minute mile or conquered Everest - such is the significance of what I've achieved. Deluded? I couldn't give a toss - I have done something very few others can claim, and that'll do for me! Roll on February!