Times when choice is not an option!

Bev hails from Yorkshire, although she (and her parents) moved "down south" some thirty years ago. When news arrived of the death of her best friend's (Jayne) father - Peter Higgins - it was never up for discussion that we wouldn't go. Ron and Denise (Bev's parents) were also determined to make the effort, they had lived next door, to Peter and his wife, Molly, for many years. Of course I'd rather have gone fishing, birding or simply wander around with my camera - not gonna happen! My place was with Bev and her parents to pay my respects to a guy that I'd never met. My loss apparently - the funeral service providing me with a picture of a fun-loving, dedicated, family man, a devout and robust christian and a very loyal husband. His grand-daughter, Rebecca paying a particularly moving tribute as she recalled memories of her grand-father during her childhood. 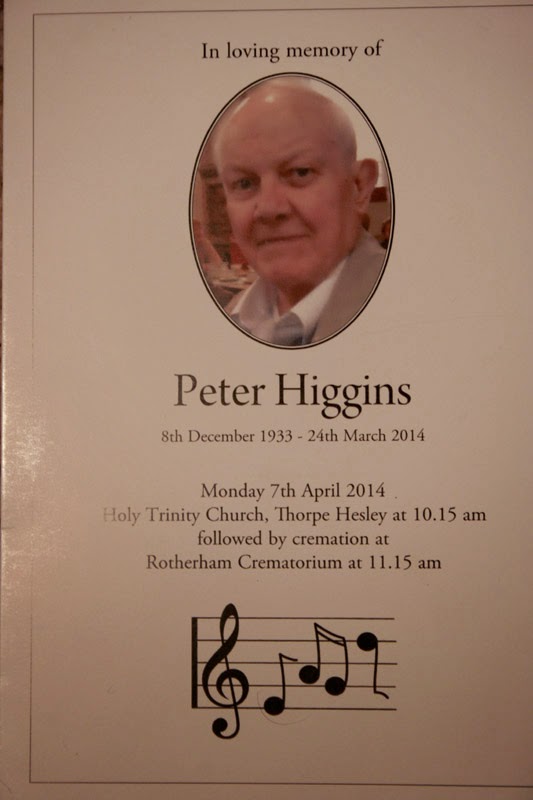 I have to give credit to the "God Squad" - they certainly know how to put on a show and play games with, even the hardest and most cynical individuals' emotions. Being in the Holy Trinity Church (Thorpe Hesley) today, was to be in company with a tight knit community who find great solace within their faith. I have nothing but admiration for those who are so certain, whose faith allows them to believe in the writings of the scriptures. Whilst I was in this superb little church, I have to admit that a tear, or two, were shed but not for Peter, or for his family, I found myself thinking of Mum and her devotion to this stoic belief in a guy whose story certainly didn't get written down, in English, as it happened. The book that forms the basis of their faith being, at best, a series of "Chinese whispers"; meanings lost in translation as the individual scholars interpreted the writings of a previous generation. Yeah, I really, really do want to believe in something, something bigger and better but, even in my darkest hours, I can't find any comfort in the teachings of this type of church. It was, however, a lovely service and provided a great tribute and send off for a man whose life enriched many of those with whom he came in contact - sleep well Peter Higgins.

We all traveled up, to Rotherham, on Saturday and stayed for two nights in the Brentwood Hotel, Moorgate Road. It is a "Flaming Grill" pub and, as such, can be recommended as an eatery - the hotel part of the operation is barely adequate. My own slant is that it's "tired" - Denise just said it was "crap!"
No point dwelling on this, we were only there for a funeral, and the accommodation was purely a base for the important bits of our itinerary. We drove into Brinsworth, had a beer and a bite to eat in The Three Magpies - Bev and her parents having fond memories of this pub.We also went to Rotherham town centre, on Sunday morning and I was absolutely amazed at the dominance, and stunning appearance, of Rotherham Utd FC's ground - a mind blowing, visionary, statement of the vibrancy within the local community (They'd all been down to Kent, on the Saturday, and beaten The Gills 3 - 4!)

The weekend hasn't been totally devoid of natural history - there were two Red Kites moving purposely, west, high over Herne Bay, as Bev and I picked up Ron and Denise on Saturday morning - a year tick!
I'd given the car a full clean, inside and out, earlier and had been fortunate enough to get to opportunity to photograph the micro-moth Esperia sulphurella in our driveway. Sunday afternoon, some 250 miles further north (via the motorway net-work - not a straight line!) I grabbed the chance to spend an hour, or so, wandering the wooded footpath besides the M1 at Thorpe Hesley.  A decent number of Andrena sp. were actively feeding around the football pitch/park and the woodland beyond provided me with a chance to grab a few images of Birch Shield-bug and the micro-moth Eriocrania subpurpurellia. There were Common Buzzards, Nuthcatch, Coal Tit  and Mistle Thrush on view but, because I had the extension tubes fitted, my photographic efforts are very macro biased. We arrived home just around 18.00hrs and I must admit that it's nice to be back! 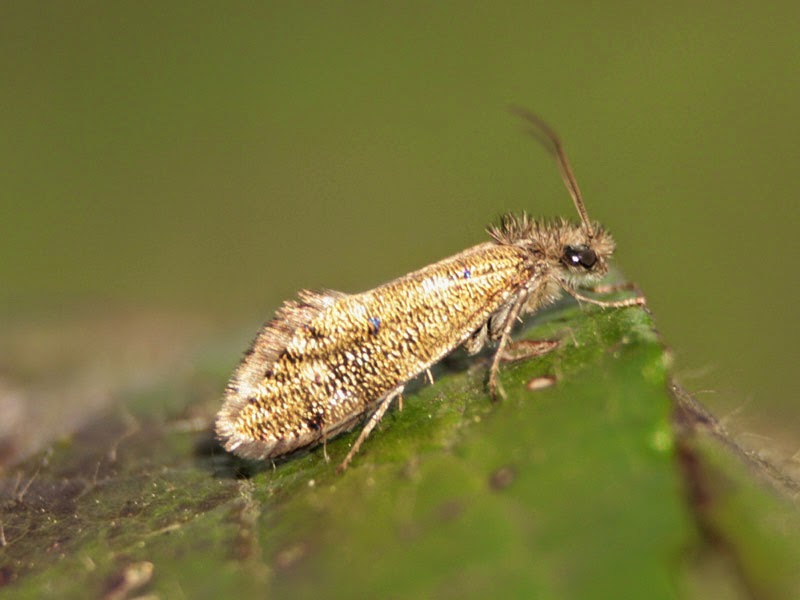